Last week my 14-year-old nephew Zev came to visit and help out in the gardens here at the farm.  He arrived amidst a major heat wave, but was eager to get to work soon after he settled in.  Because of the intense heat, I did not argue with him when he objected to my suggestion that he wear closed shoes and socks while preparing a new bed for planting.  He said he would be fine in his sandals.  We both learned our lesson there…

After about two hours of work in the hot sun, he had an accident involving a pitch fork and his foot.  He hobbled to the house, slightly in shock, with a wound between his big toe and second toe.  It was hardly bleeding (there is less blood circulation in the foot compared to other parts of the body) but he was in great pain, his foot was beginning to swell and he could not put weight on it. 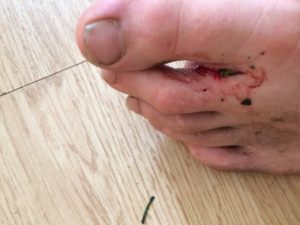 I immediately gave him some homeopathic Arnica to help deal with the shock and pain of the injury.  Meanwhile, I cleaned  and assessed the wound.  It didn’t seem deep enough to need stitches, and I hoped we could treat it without having to go to the hospital.  We bathed the foot in a salt bath that had a strong tea of some of my favourite wound herbs added to it:  yarrow, St John’s wort, plantain and self heal.  The bath seemed to soothe the pain, and helped to pull out debris from the wound. 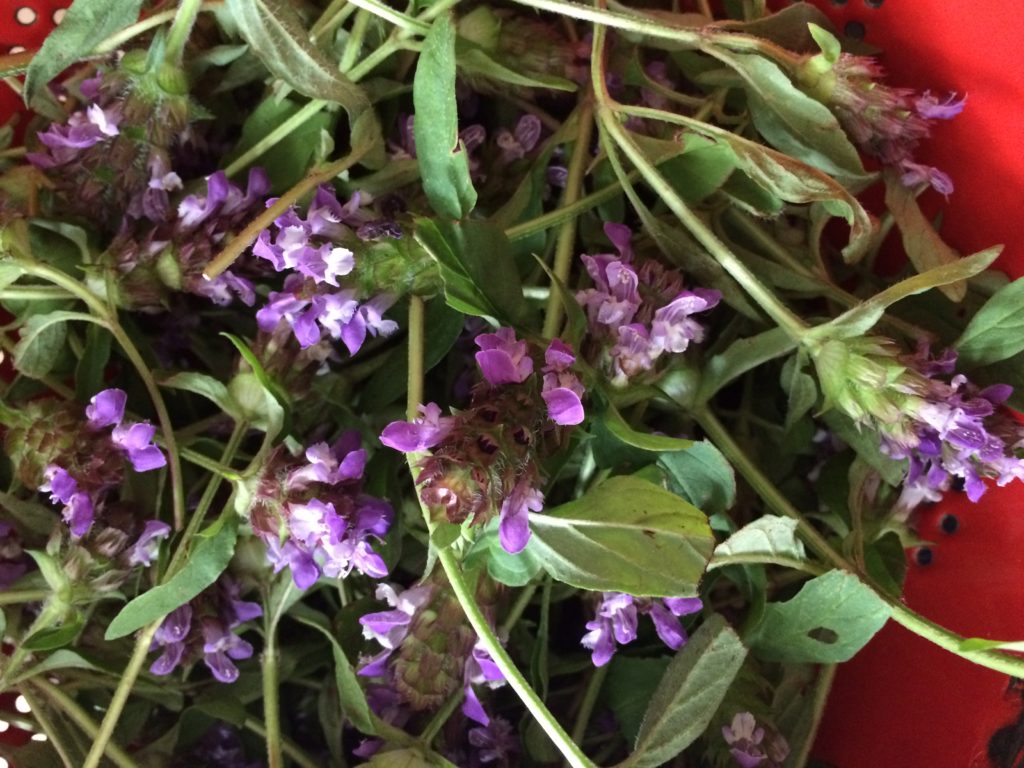 However, by the next day, the swelling and pain continued, and we decided it would be worthwhile to get an x-ray and a medical opinion.  Off to the ER we went.  The x-rays showed no fracture, so this was good news.  The  concern however, was of infection, indicated by the swelling and redness.  The types of infections that could occur from a wound like that were worrisome.  The doctor suggested an intravenous antibiotic.  While we were hoping to avoid this (as antibiotics can interfere with immune system’s own attempts at healing, using the body’s healthy bacteria for defense), we decided that in this instance, with a potentially powerful and fast moving infection, it seemed we may be foolish not to try the antibiotics.  And so we did. 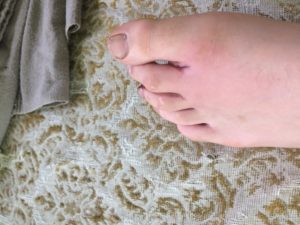 Talking to the doctor however, we realized that he was concerned that even the antibiotics might not be enough to clear the infection.  This was the scariest part for us.  Such a strong shot of antibiotics still might not work?  The reality of antibiotic-resistant bacteria was hitting home for me.   I recall a number of instances in my youth when antibiotics were given to me, and any infection I had would clear up fairly quickly.  Nowadays of course, this is no longer the case as bacteria are developing their own defenses against broad spectrum antibiotics that had once wiped them out cleanly.

I realized that it would be up to us to do whatever we could to help fight off infection. 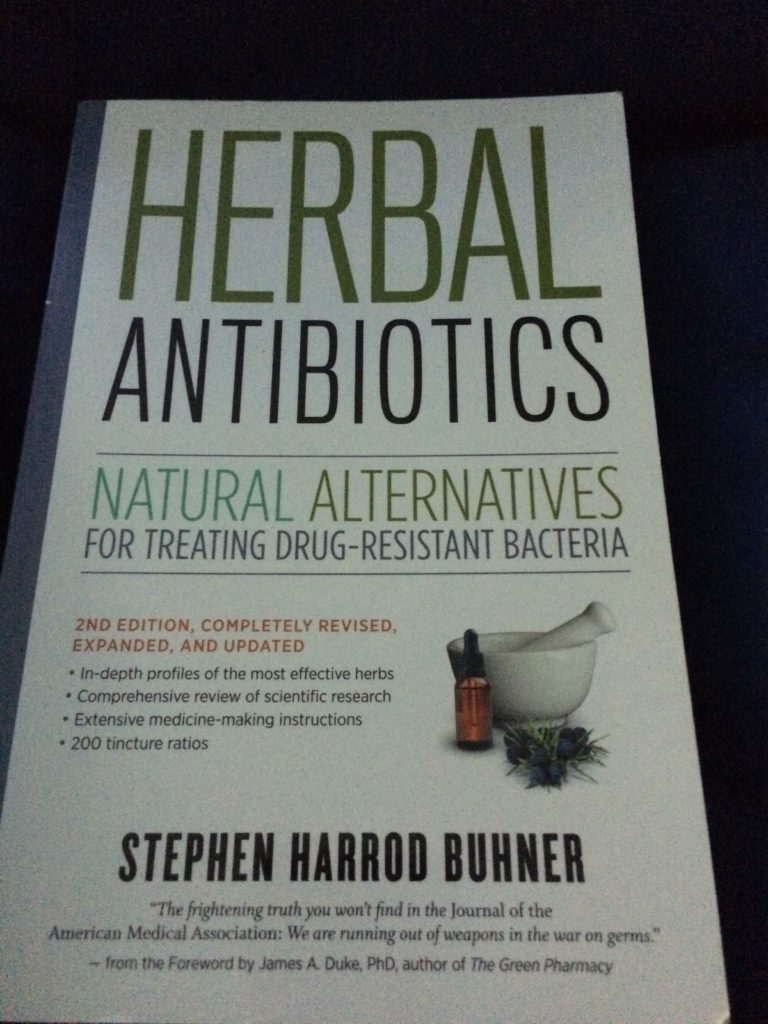 With the help of a wonderful resource, Stephen Harrod Buhner’s “Herbal Antibiotics”, I put together a tincture formula of immune-boosting, antimicrobial herbs.

It consisted of 1 part:

I gave him a 1/2 teaspoon dose of this tincture, every 1-2 hours throughout the day.  We also bathed the foot daily in salt water with herbal tea added.  The herbal tea consisted of the same herbs I had used in the initial foot bath (yarrow, st john’s wort, plantain and self heal). 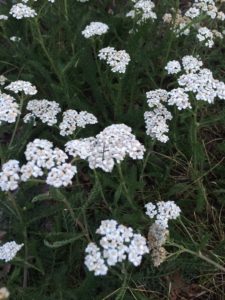 I had him take a full bulb of garlic, minced, by swallowing it with water (like taking a pill) in order to really boost the immune system. I also added lots of fresh garlic to the meals I was serving him. 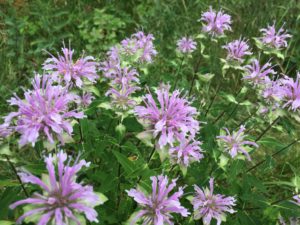 And finally, we made daily poultices on the wound using fresh plantain leaf.

This part seemed by far to be the most effective thing we did.

I picked 2-3 fresh plantain leaves, dipped them in very hot (just boiled) water for 10-20 seconds, and then took them out to cool to a comfortable temperature.  I then laid the leaves flat over the wound, where they stayed for about 15-20 minutes with his foot elevated, resting on a chair.  Following this, I repeated the same process once or twice more, using fresh leaves.  Each time we removed the leaves, we were both in awe at the continual draw of fluid and infectious debris it pulled out.  As we did it, we watched the redness and inflammation reduce, as well as the pain.

After three days, the wound looked clean and was beginning to develop a scab.  He was not only able to walk again, but said he also felt ready to get back to work in the gardens!

At this point, the only lingering concern was that he said his toes sometimes felt “tingly”, and they felt  like they had been a bit dislocated from their proper placement.  To help with this, I added mullein leaf to his foot bath, and also gave him some mullein and st john’s wort salve to apply topically to his foot at bed time.  The mullein can help to heal damaged tendons and re-establish the proper placement of the toes, while the st johns wort’s nerve-healing expertise can help restore any nerve damage. 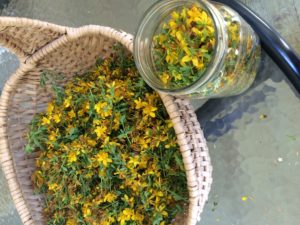 By the time he was ready to go back home, the foot was almost 100% healed, and he had learned a whole lot about herbal first aid and infection care.  I am grateful that he was open to his aunt’s herbal support through the process, and as always I am ever so grateful to the many plant allies that stepped up to bring us healing through this mini crisis.  An extra special shout out must go to the master herb Plantain, however.  This should be the first herb that comes to mind when cleaning and healing a wound.  And luckily, it grows in abundance all around us, offering its healing support pretty much any time we need it. 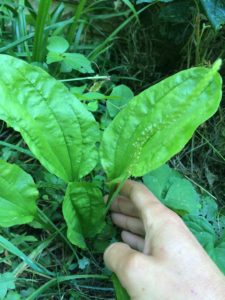 Thank you plantain for your brilliance and the generous healing you offer us!

And thank you Zev, for all your good work in the gardens! 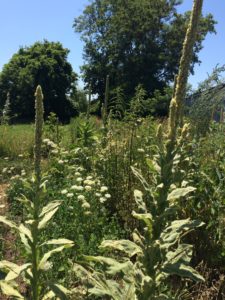